Any plans on an Android version?

Everything about this game from the artwork, to design, animation, and music is absolutely gorgeous!

Hello, I like to start off with saying everything that was shown in the trailer captivated me; the music, the colors, the character design's, and the little dancing animation the main character and her froggy does during the swap segment.

I can't get the demo to play though. I use a MAC and when I try to play the demo the icon would bounce on my desktop a few times, the screen would turn black for a few seconds, then it would go back to the desktop.
I followed dewbone3 suggestion about opening trough the macOS file but the same thing happened.

I'm not sure if this helps but after the demo cancels the terminal says "Segmentation fault: 11"

if you need anymore information about the mac, let me know

Thank you for reading

we're looking into this and it's on our list of bugs for whenever we release an update for the demo. Thank you so much for letting us know! Unfortunately, due to us being a very small team with limited resources, we won't be able to address this for a while, at least until we have time to dedicate to the demo  over the game itself... I'm really sorry and very grateful for your report and patience!

hey! i really wanna stream your demo, but your game has an uncapped framerate and is blowing up my GPU by running at ~1800 FPS. is there a chance you can introduce a vsync or framerate limit option? thanks!

i know this was 6mo ago but you can set a framerate lock or vsync yourself in your gpu settings!

if you have nvidia:
right click on desktop → nvidia control panel → program settings. select the .exe for the game, then set your max framerate to what you prefer. hope this helps x

I was checking through the Palestine bundle when I saw I had this and was surprised to see a game describing itself as Levantine in nature; I am descended from Palestinian and Lebanese parents and have lived in Jordan (as well as Kuwait, though that's not Levantine). So I tried it out!

I didn't really get any sense of that sort of culture in the game, mostly just from references such as to eating knafeh (delicious!) as well as the usage of henna in character designs. I'm curious to see how much further the full game might go to represent my ancestral culture in the full version!

hey hey Marimo! This is a bit unusual but I'm alex, the creative director on this game and I'm Lebanese hehe born and raised!

This game is so important to me and I wanted to infuse it with every facet of my identity and that of my loved ones, blood family or found family. You are correct that the demo doesn't get to showcase any of that, but we're working really hard to make sure the game does. It's not gonna be an exoticism view on it so it'll just be in the setting, the backgrounds, the plants, the objects, you know? It's hard to explain through just the endless mode... I thought I'd share a little concept art one of our artists did for the game. I gave them pictures of my grandma's house I took in Beirut for inspiration, and the result kept making me cry... I can't show the final yet but I can show you where it started, and hope you see yourself reflected even a little in the final.

Thank you for trying the demo! <3 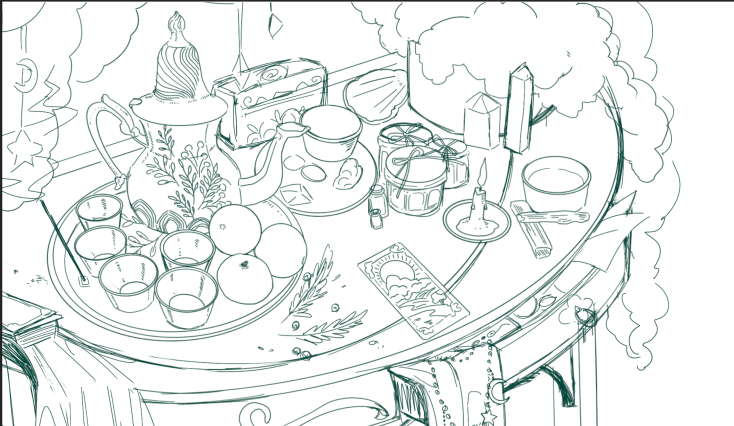 Thank you so much for taking the time to respond, and I hope my initial comment wasn't too aggressive in tone. The sketch there definitely oozes the Levantine culture I'm familiar with, particularly the tea adornments and set. It is kind of amazing how on itchio comments and feedback can be given in this manner, something not too easily possible on other platforms, and it's why I love checking out new and exciting things here.

Congratulations on the Kickstarter campaign and I do look forward to see it all put together!

Just tried the mac demo and sadly it ran pretty slow on my relatively new laptop. Also, I got flashing red lines on the edges of the screen that might be a seizure risk. I hope the full release will work for me, because this looks so cool otherwise!

thank you for this! I'll make sure to look into it, can you please let me know the specs for your mac? Is it intel or M1 chip? What OS are you on?

It's a really nice game, but I have a question. Why did you name your character Iskandar? Iskandar was a very popular Indonesian name in the 70s. Does this mean he's Indonesian, or secretly an old man?

LOL that's amazing and we had no idea!

"Iskandar" is also an old man name in Lebanon, where the creative director is from and the setting is inspired! It's the Arabic version of "Alexander"! He's supposed to be Arab, but that's a very interesting note, thank you for sharing!

just found out about this game. do u guys plan on releasing that game on console ? my poor laptop cant handle anything at all  and i would love to play this

no plans as of yet but it is our dream to have it on console, so we're gonna try our best!

thx . i really wish yall the best and hope that day will come true . i would love to play it on xbox

I love this! While I'm generally not a huge fan of this style of game, I really like the art style and the feel of the game overall. Plus, I certainly can't pass up a game that's overtly queer :p

I got the demo in a bundle and I got to say. Great game for it's genre. It's pretty relaxing and seeing the features to come sounds pretty damn great. Good luck in your build, will likely pick up a copy for me and my girlfriend when the official release drops. 10/10 if you're looking for a chill puzzle game with some nice neon flare to the art.

i loved this game! im a big fan of pokemon puzzle challenge/league and this nourishes my thirst for the genre!

I love this game! I can't wait for the full version to come out.  Love how divers it is. The art style is so cute and amazing!

The vibes are indeed very chill on this one. Excited to see how the rest of the game turns out!

I've seen a lot of positive reviews of this game, and I hate to be that guy. However, someone has to point out the GLARING flaw in this game. Its beautiful art style, simple and fun gameplay,  and super relaxing music make it far too addictive. I could hardly pull myself away to write this. So, be warned.

Very solid. Good difficulty gradient, too - chill is just that, un-chill provides enough impetus to use the spell, and oh jeez is... oh jeez oh fuck.

This looks AMAZING. It plays great too but I can't get over how cool it all feels.

The Mac demo doesn't work for me, it just comes up with a black screen

Never mind I got it to work :)

how did you make it work??

I right clicked the .app file, clicked show package contents, opened contents, MacOS and opened the file in there. Hope this helps :)

You will! So many of them! Just gotta keep some stuff in store for the final game...

we hope so too! Hopefully next year!

Had a really fun time playing this game and I definitely wanna see where it goes!!

omg this is the first match 3 game that doesn't stress me out, the music is beautiful and soothing, and the artstyle is gorgeous!! i love this so much already ;-;

Looks like a pretty nice game, love the art style, however, I don't own a Mac so I can try it, any plans on when a pc demo will be available?

why's there only a mac version?

Hi, I saw someone comment about a PC ver of the demo but the current download seems to be Mac only. Will there be an updated PC demo, or is there a place to get a previous version?

I wanted to play the new demo with the song from Unbeatable, but it looks like only the Mac update is available. Will you be adding the Windows version as well? Thank you in advance!

no problem, thank you for fixing it! ^-^

I don’t know that the “why spirit swap” section is needed on this page. The bit about it being a premium game could go in the features and the rest of it belongs on your website unless being used explicitly as marketing (which would be quite morally questionable).

Just 2¢ from another developer. Wish you luck :)

I really like the feeling the game gives me, but because I'm so tired all the time, even this is too hard for me. I wish there was some kind of relax mode so I could just use this to relax, instead of having to really focus.

If you do, could you also add it to the demo so I know this game is for me before I spend my money on it? Because I barely have enough money to live from as it is..

Also, if it's not too much trouble for you, maybe a linux version as well?

Hey Naomi! Thank you for the feedback, we're considering a chill mode for the final game but can't promise it right now! Not sure if we'll be able to make a Linux build of the demo with only 7 days left for the Kickstarter but we will if we have time! The final game will be available on Linux for sure.

Oh no, the linux build thing was not about the demo. No rush. Just asking for maybe the final build or when you have time after everything is done or something.

the final will be on Linux too! :D

You've said Online Vs. is not in the plan, but I'm putting this out there with hopes that this somehow becomes real. GGPO Rollback Networking SDK (https://www.ggpo.net/) is free under The MIT License, here's rollback pseudo code (https://gist.github.com/rcmagic/f8d76bca32b5609e85ab156db38387e9), and check out Fightcade (https://www.fightcade.com/about) which lets you play Tetris Attack with P2P rollback netcode.

The demo is great. Good music, lovely visuals, and it even has gamepad support. I love playing on my arcade joystick. Not sure where else to leave feedback, but there's some game logic that doesn't quite work like in the original. Some other features I'd like to see: Button Mapping/Assignment menu, Tutorial Mode, Leaderboards/High Scores. Keep up the good work.

hey Shining4ace! Thank you for all that, and we'd love to hear more of your feedback, there's a demo feedback channel specifically in our Discord if you'd like to join it? https://discord.gg/pSYhWbq2J8

Hi! I would like to offer my service in order to translate Spirit Swap into Spanish. I know it may seem too early to think about it but I think it could really benefit the game in the near future!

I leave you my e-mail for further information or details. Please feel free to contact me and ask me anything. d.patch@hotmail.es